Walter G. Moss is a professor emeritus of history at Eastern Michigan University and a Contributing Editor of HNN. For a list of his recent books and online publications click here. His most recent book is In the Face of Fear: Laughing All the Way to Wisdom (2019), which treats humor from a historical perspective. 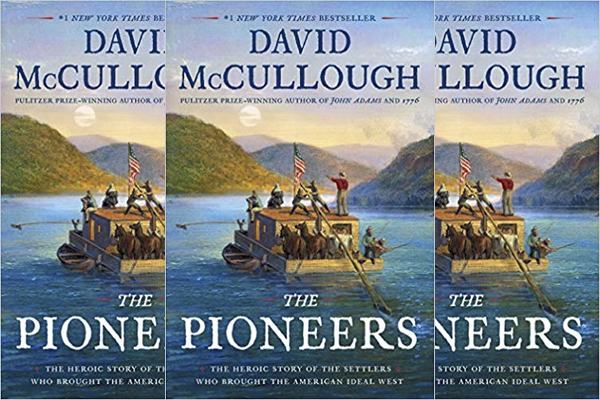 Last year’s publication of David McCullough’s The Pioneers: The Heroic Story of the Settlers Who Brought the American Ideal West presents the pioneers who settled Ohio as heroic settlers. Some reviews like those in The New York Times (NYT) and Washington Post(WP) fault McCullough for downplaying the settlers’ mistreatment of Native Americans. In May 2019, an AP article, abridged on HNN, detailed more criticism.

In NYT, historian Joyce Chaplin wrote, “McCullough plays down the violence that displaced the Indians, including the actual Ohio people. He adopts settlers’ prejudiced language about ‘savages’ and ‘wilderness,’ words that denied Indians’ humanity and active use of their land.” In WP, historian Andrew C. Isenberg stated,“To McCullough, the natives were little more than impediments to progress. . . .The fortitude of the settlers McCullough describes was quite real. So too was land fraud, racial hierarchy and the ousting of Native Americans from their homes.”

But other reviews in more conservative publications applaud McCullough’s depiction of the pioneers as heroes. The National Review[NR], for example, does not mention the Native Americans except to state that the Northwest Ordinance of 1787 called for “the just treatment of Indians and their lands.” Instead NR complains, “Not long ago, the westward expansion of America, along with the names of the great pioneers, such as Daniel Boone, was taught to schoolchildren—not as history for which to apologize but as something to celebrate and revere, a source of national pride. That was for good reason: What the early pioneers accomplished was remarkable.”

The Washington Times (WT) reviewalso all but ignores the fate of Native Americans except to note that “the Native American communities living in the territory ‘did not believe land was something to be owned,’ for example, and were troubled by the settlers.” And “many treaties were signed between the Indians and settlers, but distrust still ruled the land in early America.” The review’s final sentence reads, “The early pioneers ‘accomplished what they had set out to do not for money, not for possessions or fame,’ writes Mr. McCullough, ‘but to advance the quality and opportunity of life.’ Their success is our success."

The contrasting reviews of McCullough’s Pioneers reveal several important  messages: 1) Our nation is too polarized; 2) We, including historians, should seek truth rather than a confirmation of our biases; 3) Our nation’s history, like that of all nations, contains both noble and ignoble deeds; and 4) We need the national humility to own up to dishonorable deeds like decimating Native Americans, slavery, and racism.

About our national polarization we have already read much, and thus can move on to our second point. About the importance of truth-seeking and historians’ responsibility “to tell the truth, warts and all,” I have already written, but an additional point should be added. HNN recently linked to a discussion about a lengthy report on American textbooks by NYT reporter Dana Goldstein. It analyzed how those on U. S. history in California and Texas reflect our nation’s political polarization. President Obama once quoted former New York Senator Daniel Patrick Moynihan who said, “Everybody is entitled to his own opinion, but not his own facts.” Yet, we have become so polarized that the history our students learn, the so-called “facts,” depends on which red or blue state they attend school.

Concerning point 3, that our history contains noble and ignoble deeds, there can be no real argument. As indicated in an earlier HNN article, “two of its most heinous crimes” were “genocide against Native Americans and slavery.” As some of the reviews of McCullough’s The Pioneers stressed, the pioneers were especially implicated in the whites’ treatment of Native Americans. Pioneer heroes like Daniel Boone and Davy Crockett often fought against native peoples, who regarded the white settlers as usurpers of their lands. An acquaintance of Boone’s, Abraham Lincoln (grandfather of the future president), was shot by an Indian and died. President Lincoln himself shared many of the prejudices towards Indians exhibited by the great majority of our presidents.

But Lincoln was not as bad as Andrew Jackson, who presided over the Indian Removal Act (1830) and other policies that led to deaths of thousands of Native Americans--susceptibility to white men’s diseases had earlier been an even bigger killer. (Grant Foreman’s 1930 book Indians and Pioneers: The Story of the American Southwest before 1830 was an early account of southwest conflicts that culminated in the Removal Act.) After Jackson’s two-term presidency, the battles of pioneers and the U.S. military against Native Americans led to additional Indian deaths, with the 1890 massacre of about 150 Lakota Sioux at Wounded Knee Creek in South Dakota being especially significant.

After the massacre, a local publication, the Saturday Pioneer stated, “The Pioneer has before declared that our only safety depends upon the total extermination of the Indians. Having wronged them for centuries we had better, in order to protect our civilization, follow it up by one more wrong and wipe these untamed and untamable creatures from the face of the earth.”

In my own youth I often viewed movies where poor white pioneers in their covered wagons circled to defend themselves against “savage” Indians. My daughter Jenny read many Laura-Ingalls-Wilder novels about heroic pioneers who sometimes said “the only good Indian is a dead Indian.”

Besides the stain of decimating Indians and slavery, our past has also been dishonored by other flaws such as greed and imperialism. The Spanish-American War, beginning in 1898, is a good example. It wrested Cuba, Puerto Rico, Guam, and the Philippines away from Spain. Republican Senator Albert Beveridge declared that “American factories are making more than the American people can use . . . the trade of the world must and shall be ours. . . . The Philippines are logically our first target.” But not all of the Filipinos wished to come under new foreign control. To subjugate the Filipinos, U.S. troops had to wage war against guerilla forces. By the end of 1902, over 200,000 Filipinos had died. One participating U. S. officer had this to say about the conflict: “Our men have been relentless, have killed to exterminate men, women, and children, prisoners and captives, active insurgents and suspected people, from lads of ten up, an idea prevailing that the Filipino was little better than a dog, a noisome reptile in some instances, whose best disposition was the rubbish heap.” (See here for sources of quotes regarding the Philippines.)

The final point to be made here, the need for national humility, also addresses the question posed in our title, were the pioneers “heroic settlers or Indian killers? Respect for truth leads to the response “both.” Among the many pioneers, stretching over several centuries, some displayed heroic qualities like courage and bravery in enduring great hardships and some killed Native Americans. Some, like Daniel Boone and Davy Crockett, did both.

In an earlier HNN essay, I criticized Jarrett Stepman’s The War on History: The Conspiracy to Rewrite America's Past (2019) for stating, “An informed patriotism is what we want. . . . Is the essence of our civilization—our culture, our mores, our history—fundamentally good and worth preserving, or is it rotten at its root?” His question poses a false either-or choice. Our history is “worth preserving,” but not because it is “fundamentally good.” Like the history of most countries, our past contains noble and ignoble deeds. Decimating Native Americans and slavery are part of our past, but so too are nobler deeds and words of our Founding Fathers, Lincoln, Franklin Roosevelt, and Martin Luther King, Jr. (MLK).

Despite many differences that liberals and progressives might have with conservative  columnist Ross Douthat, he wrote some truths about our past in his 2017 article entitled “Who Are We?” He noted that many Americans prefer “the older narrative” and identify “with the Pilgrims and the Founders, with Lewis and Clark and Davy Crockett and Laura Ingalls Wilder.” Moreover, “Trump’s ascent is, in part, an attempt to restore their story to pre-eminence. It’s a restoration attempt that can’t succeed, because the country has changed too much, and because that national narrative required correction.”

The “correction” that is required is a “warts-and-all” history. Historians’ main job is not to teach a false “patriotism,” but to tell the truth as best they can. But in addition, patriotism is about loving one’s country, not ignoring its past sins. Just as we can love others despite their sins, so too we can love our country despite its past ignoble deeds.

While personal humility is thought wise and sometimes praised--even if less practiced--political and national humility are less fashionable. In 2005, Democratic Congressman David Price (N.C.) stated: “Humility is out of fashion these days. Political leaders, advocates, and pundits often display an in-your-face assertiveness, seeming to equate uncertainty or even reflectiveness with weakness and a lack of moral fiber.” In our present Trumpian period, Price’s words are truer than ever.

In his 1966 book The Arrogance of Power, Senator J. William Fulbright wrote about the lack of humility in powerful nations like ours, which are “peculiarly susceptible to the idea that its power is a sign of God’s favor.” In 1967, about a year before a bullet ended his life, MLK warned in a speech about the Vietnam War that “enlarged power means enlarged peril if there is not concomitant growth of the soul. . . . Our arrogance can be our doom. It can bring the curtains down on our national drama.”

In their 2006 book Ethical Realism Anatol Lieven and John Hulsman stressed the need for nations to act with “a sense of humility,” and indicated how such political thinkers as Reinhold Niebuhr and George Kennan stressed this idea. In Rumsfeld’s Wars: The Arrogance of Power (2008),Dale R. Herspring criticizes President Bush’s secretary of defense for his lack of humility, which contributed to our government’s tragic Iraqi involvement.

Now in 2020, as we face upcoming elections that will help determine our future, we need more than ever forthrightly to face our past. Confident, secure individuals are unafraid to admit past mistakes. So too should nations be thus bold. Unless we in the USA acknowledge not only the heroic, but also heinous deeds of our past, we will  fail to face our future with the courage needed to overcome such ills as racism and our present political polarization.