Lessons on Isolation and Humanity in a Family's Letters from Hiding

Daphne Geismar is a teacher, researcher, and book designer whose clients include many of the world’s most prestigious museums. She lives in New Haven, Connecticut. Her forthcoming book Invisible Years: A Family’s Collected Account of Separation and Survival during the Holocaust in the Netherlands will be published on May 5 by David R. Godine with a foreword by Holocaust scholar Robert Jan van Pelt. 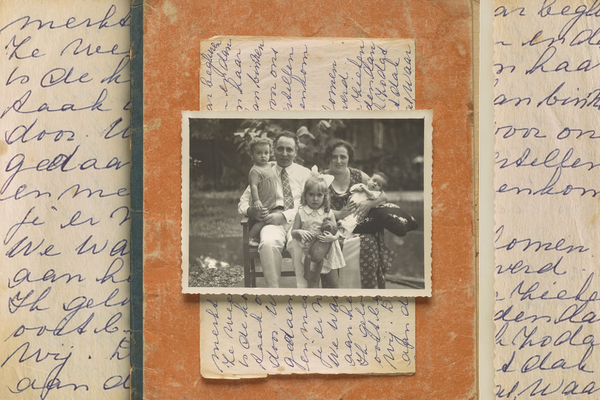 Why do I begin just today, to write on the day that has brought me the most personal worries of the last three and a half years? Most likely because I am cut off from the things and people with whom I could exchange thoughts at work, because my domestic surroundings have dissolved, because of  the helplessness in which I find myself, condemned to sitting still, the unaccustomed quiet.

This is not a COVID-19 quarantine journal, but the opening words in a diary by my paternal grandfather, Erwin Geismar, written in hiding shortly before he was arrested and then murdered in Auschwitz.

As children, my mother and father—separated from their families—went into hiding to escape a horrific regime in the German-occupied Netherlands. An extraordinary cache of letters and documents from their ordeal reveal experiences of isolation, fear and uncertainty that, although incomparable, have particular resonance today.

Because of the novel coronavirus, we are restricted to living, working and studying in our homes. If we can, we might go outside to walk around the block for a change of scenery, but many of us are confined indoors, constrained by illness or our vulnerability to it. My maternal grandparents, Chaim and Fifi de Zoete, spent two full years in a church attic, where Fifi turned to sleeping pills to cope with her restlessness. Hidden with resistance workers, my mother, Mirjam, struggled with this monotony:

The world is wondering how long this isolation will last. My mother described how she coped with similar uncertainty:

You always thought it would be just another month in hiding. If we had known it would be almost three years, it would have been terrible for us. But we believed the English or the Americans would come. You always believed it would be over soon.

Today, separated from our families and friends, we are afraid that those we love most will become sick, and we check in constantly to see if they are well, by telephone and Zoom. We ache for those who are suffering and dying alone from COVID-19, unable to comfort them. In 1942–43, only a few clandestine letters made it from one hiding address to another. After that, parents and children didn’t know where the other was, or even if they were alive, until war’s end.

Anxiety over the fragility of life and health is compounded by financial insecurity amid a global economic crisis. At the time of this writing, 30 million Americans have lost their jobs due to the coronavirus. In late 1940, all Jewish civil servants in the Netherlands were fired from their jobs, including my grandfather Chaim, a pharmacist. He could no longer afford rent.

In these extraordinary times, the day-to-day burdens of caring for our families—from securing groceries to educating our children—become amplified. Today, schools are closed for everyone because of the pandemic, and teachers and families scramble to adjust to remote learning. At the start of the school year in 1941, Jewish children were forbidden from attending public schools. My aunt Judith recalled:

For a short time, we went to an improvised Jewish school in The Hague, which was about an hour away by scooter. I say “improvised” because it wasn’t a real school. It was two rooms in an empty mansion that had been relinquished by its Jewish owners. A few Jewish teachers . . . somehow taught a bunch of kids of all different age groups together. How they did that with all the pressure they were under, I don’t know.

My mother was more succinct: “We were about to be murdered by the Nazis, and our parents were still worried about our education.”

Preoccupied by the daily tallies of confirmed cases and deaths from the coronavirus, I am reminded of my father, David, tracking the fate of his schoolfellows:

I was one of the last kids in my class to go into hiding. I went in March ’43. We started with a class of sixty kids and were left with ten. At home, the table talk was about how many kids were in school that day. If one day ten or twenty kids disappeared, parents knew it was a raid, but if three kids disappeared they probably went into hiding.

For most of us today, social distancing is a means to keep ourselves safe from the threat of the coronavirus, just as hiding protected my family members from death camps. Yet I’m worried for those who must isolate with people who harm them, as was the case with Judith, whose “rescuers” repeatedly assaulted her. How many face abuse in homes they cannot leave now?

My mother died in November, a month before the novel coronavirus emerged in China. If she were still alive, would she tolerate complaints about this time of isolation? Faced with famine, she ate tulip bulbs and sugar beet pulp. She slept in a crawlspace under the kitchen floor with four other children. They were not allowed to talk, because “you never knew who was above your head in the kitchen.” While the experiences of my family, and the others who were persecuted across German-occupied Europe, are unparalleled, their fears and struggles nonetheless anticipate aspects of our lives amid the global pandemic. They also provide a moral compass and reference point for understanding the suffering in this moment.

Jews—and others such as Roma, homosexuals, and the physically and mentally disabled—were stripped of their humanity by fascist leaders, through prejudice and hate. A virus doesn’t discriminate. But our social structures, systemic biases, and policy choices have made some populations particularly vulnerable. This pandemic has changed us. We must make changes so this tragedy, like the Holocaust, isn’t repeated.

As I consider what life will look like after the novel coronavirus, as we remember its victims and are grateful for its survivors, I think of a letter that my grandfather Chaim wrote to his three daughters, my mother and her sisters, in 1950:

When the war was over and we were free once again, days of great happiness arrived. But it wasn’t just our freedom that was returned to us; it was as if life itself had been put back into our hands. For our very life had been stripped from us. From us, which is to say from European Jewry. People had actually bid us farewell as if we were really dying. And it wasn’t because we deserved it that death, passing by us so closely, had spared us. I saw you get off your bicycles right under the blossoming chestnut tree only to disappear through the old gate of the lyceum. Gladness and gratitude overwhelmed me. . . . But this feeling was almost immediately stifled, remembering just one of the millions of cases where the children had not returned. Surely countless ones among them must have been a thousand times more deserving than we.

Note: excerpts from Invisible Years: A Family’s Collected Account of Separation and Survival during the Holocaust in the Netherlands, by permission of David R. Godine, Publisher.